With BT Broadband, customers enjoy an ultrafast connection even at the busiest times. 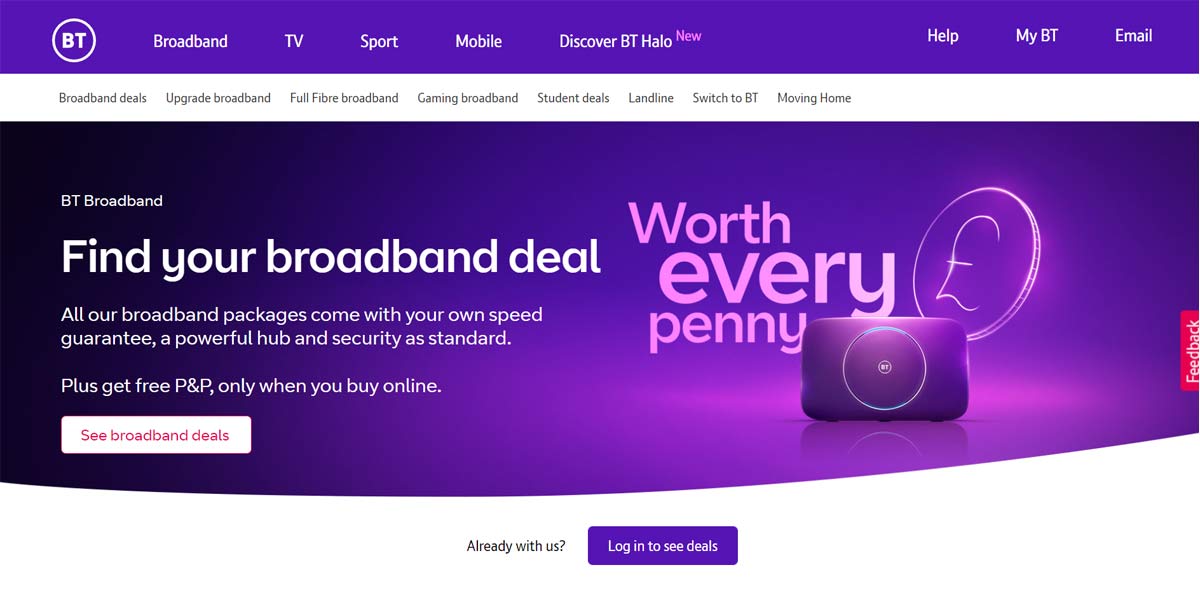 BT Broadband is a well known name in the broadband provider market. It is currently upgrading its network so that it has a nationwide Full Fibre infrastructure so that it can provide the UK’s most reliable connections. Importantly, Full Fibre will also allow it to offer customers a lightning quick connection of 900mb/s even at peak times. The company has also attacked the common problem of decreased connectivity in certain parts of a person’s home with its Complete Wi-Fi offering. It guarantees a reliable signal in every room of the house or customers can have £100 money back as part of its guarantee.

BT Broadband has a complex approach to its price packages versus speeds. However,  what is good about that is you should be able to find a package that suits your budget, and, with its speed guarantee, you should at least be certain of a usable average speed.

Its cheapest package is its Fibre Essential Only. For new customers only, it has an average speed of 36mb/s with unlimited downloads over a 24 month contract. It costs £27.99 a month and has no set up costs. No set up costs are increasingly rare in the broadband market so this package is actually incredibly affordable especially given its serviceable average speed. Granted it is by no means the quickest, but depending on what you use the internet for, it could well be all you need.

On the other end of the scale, is its Full Fibre 1000 offering which costs around £59.99. However, it is difficult to ascertain what it will cost exactly as the company does not allow potential customers to view deals for this package unless it is available in their postcode.

Bearing that in mind, the next quickest option is its Fibre 500. As the name suggests, the average speed a customer can expect is 500mb/s. The package comes with unlimited downloads and is for a 24 month contract. The company will usually offer a reward card with this package, which will often bring the average cost per month down by a couple of pounds. Customers also get free access to BT Wifi Hotspots with this package. It is only available to new customers however.

BT Broadband became a giant in the broadband market for good reason. Its vast network means that it can reach almost every home in the UK. The problem is, it cannot reach every home in the UK with a high speed. Customers will be frustrated that average speeds come down dramatically depending on where they are located. Even for customers near or in urbanised zones, there is no guarantee that you will hit the lightning quick speeds that some of BT Broadband’s customers can enjoy. That being said, the company maintains that all of its average speeds are above 30mb/s which is the Government’s definition of superfast broadband. In practice, that means the majority of users will find that the speeds they experience are more than enough for their needs.

How Much Does a Jane Plan Cost? Reviews & Diet Plan

Is Cold Pressed Food Good For Dogs? Everything You Need

How to Grow Your Wine Club Memberships: 7 Ways To Get Your Customer Numbers Up

Get Covid Tested At Home In Minutes

Pet Insurance: Costs, Exemptions and How to Pick a Great Policy

The Cheapest Teeth Aligners: Which Are the Best Brands?

The Best Diet Tips to Pinch From Keto, Paleo and Other Big Trends

The Story Behind Best10Index Lab Testing