Get fast broadband speeds without having to pay for TV or a phone line. 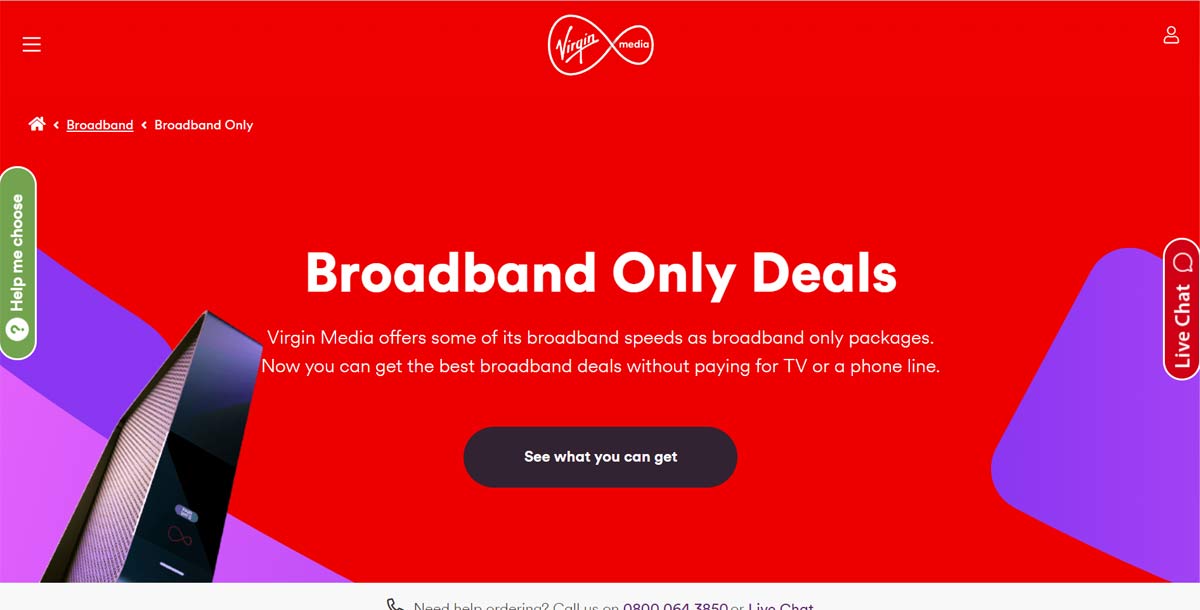 Virgin Media brings to the market some of the quickest broadband speeds a customer can get. Having started life in 2006, over the last 16 years, Virgin Media has carved out a space for itself in the UK’s broadband market and can now attest to being one of the biggest and most popular providers out there. What’s great about Virgin, is that it can provide quick speeds thanks to its own network as opposed to relying on the Openreach system which many of Virgin’s other competitors use. The downside of that is, the network is not always in every area, so if Virgin has not expanded out to where you live, you may not be able to access it. That, of course, is becoming less and less common as the company expands its network.

Its own network infrastructure so it is not reliant on OpenReach.

Virgin Media is all about the speed of its broadband. It only offers a fibre service, and has never used ADSL as a way to provide broadband to its customers. It has a wide range of packages that really vary in speeds. The slowest is its M50 package which achieves average speeds at about 50-54mb/s. The packages then move through M100, M200, M350. The company now has packages M500 and Gig1. The Gig1 package can provide speeds of up to 1,104mb/s.

On top of all these monthly prices is a £35 upfront cost for installation. That’s the same across all of them, whether you buy the slowest or the quickest speed offering. If you’re looking for value for money for a longer period of time therefore, going for the more expensive packages may actually be more attractive than you initially think when you whack in the upfront cost. However, you do need to question whether you need the lightning quick average speeds that the Gig1 gives you for that higher monthly cost.

Virgin Media has opened up the broadband market by using its own network infrastructure. While it does not reach as far and wide as OpenReach does, it does at least make the market more competitive so that OpenReach does not have a monopoly. For us, we like the wide range of price points that mean there should be a broadband package for everyone, particularly given that you do not have to buy TV or landline products with a broadband subscription too. On top of all that, Virgin Media has the ability to offer its customers the fastest speeds on the market. While the user experience may not be able to differentiate between Virgin competitor’s highest speeds of 900mb/s versus Virgin’s 1000plus mb/s , it’s great to see that the broadband providers are developing technology to keep one step ahead of each other.

For the latest discounts, offers and news, sign up for free today.

The Guide to Selecting the Perfect Wine Club Gift Membership

Tips for Choosing the Right Size Hire Car for Your Holiday Needs?

How Much Does a Jane Plan Cost? Reviews & Diet Plan

Is Cold Pressed Food Good For Dogs? Everything You Need

How to Grow Your Wine Club Memberships: 7 Ways To Get Your Customer Numbers Up

Get Covid Tested At Home In Minutes

Pet Insurance: Costs, Exemptions and How to Pick a Great Policy

The Cheapest Teeth Aligners: Which Are the Best Brands?

The Best Diet Tips to Pinch From Keto, Paleo and Other Big Trends

The Story Behind Best10Index Lab Testing